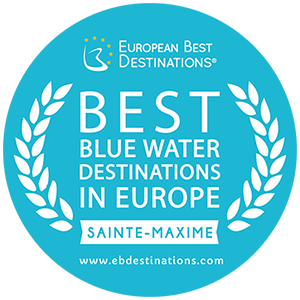 For the occasion of the Best Blue Water Destinations competition, Sainte-Maxime has been elected through a 10 390 travelers panel, as one of the Best European Destination for sunkissed holidays and a crystal clear blue waters. A pride and an honor that reward the actions taken by the town of Sainte-Maxime and the Tourist Office to popularise the destination and make it a strong selling point for the Mediterranean region, and that accounts in the travelers agenda more than ever before.

Themed competitions such as Best Christmas Markets in Europe, Best Skiing Resorts, Best Romantic Destinations with equally significant economical and media impacts. All are based on travellers votes (Europe and the rest of the world), some competitions are open and others are based on a travellers panel voting from 174 countries.

This is the case for destinations rewarded Best Blue Water Destinations. 188 destinations have been presented to a 10.390 travelers panel from 174 countries who selected the destinations that matched their expectations and desires for a holiday in crystal clear blue waters in Europe.

Sainte Maxime, ranks in 3rd highest with dream destinations such as Dalmatia in Croatia, the Algarve in Portugal, Zakynthos in Greece, Gozo Island in Malta, Mallorca and Brac Island...